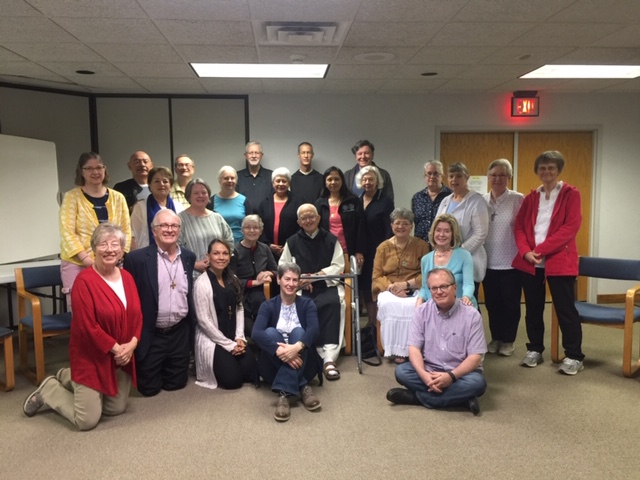 LCG is recognized by the Gethsemani conventual community as a lay community associated with the Abbey.  The Cistercian Order in 2008 General Chapter recognized that laypersons gathered at several of the monasteries aspired to better know and apply the Cistercian charism in their lives.

The representatives of the Lay Cistercian Communities present at the International Meeting of Huerta, in June 2008, warmly thank the Congregations and Orders of the Cistercian Family for the welcome and support that they have received from them for many years.

The OCSO in General Chapter responded:

Vote 71 We recognize the existence of a lay expression of our Cistercian charism in the lived  experience of the groups of lay persons associated with a number of the monasteries of our Order.
yes – 132 no – 21 abstain– 0 (over 86%)

To affirm solidarity with and support of lay Cistercians around the world LCG is a member of the International Association of Lay Cistercian Communities.

IALCC is the direct interface with the Order of Cistercians Strict Order and is composed of 46 communities, representatives of which gather triennially.  Originally meetings occurred periodically but in 2008, hosted by the Huerta (Spain) community representatives shared and fashioned a statement of common Identity.  Similarities transcended national, cultural, and language differences as noted in the Identity Statement unanimously adopted at the meeting.

IALCC continues to assist members to find a comfortable identity with our monastic sisters and brothers.  Common lay community characteristics, as with the Identity elements approved in 2008, were affirmed in 2011 by international representatives meeting in Dubuque, Iowa, as they adopted “Characteristics of Lay Cistercian Communities”

Lay Cistercian Communities, by their nature, share a great deal in common with one another and with their associated  monasteries. All united by a bond of charity, a bond of fraternal love and support, and a bond of fidelity. There exists a frequent bond of prayer that deepens their love.

After approving formation of the organizational entity within which the several lay communities would gather (IALCC), representatives in 2014 meeting at Lourdes (France) affirmed the shared common journey of lay communities in an inspiring document simply entitled “The Lay Cistercian Spiritual Journey.”

The journey for each LCG member and friend is an individual and personal response th the call of the Holy Spirit, the communal endeavor strengthens and nourishes our response to the call.  As the local communities of LCG are nourished and sustained by their common calling and devotion to LCG and Gethsemani Abbey so are we strengthened and affirmed in LCG by affiliation with our lay Cisterician sisters and brothers around the world.