You will find the tab for VIGILS READINGS on our LCG website Home Page — at the top (right). 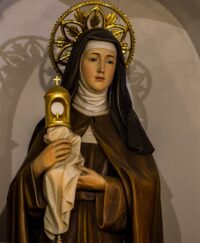 St Clare was only 18 when she heard sermons of St Francis at St Giorgio church in Assisi and was deeply inspired by his message. Toward the end of her life she said to one of St Francis’ followers, that “ever since experiencing the grace of Jesus through his servant Francis, I have never in my whole life met with any pain or sickness that could really hurt me.” One sees in her the child Jesus placed in the midst of his disciples saying, that whoever becomes humble like this child is the greatest in the Kingdom of heaven.”

According to Bultler’s Lives of the Saints “She always wanted to be the servant of servants, to wash and kiss the lay Sisters’ feet when they returned from begging, to serve at table, and to look after the sick: ‘Do what you want with me. I am yours because my will is no longer my own. I have given it to God.’” She had learned that humility Jesus speaks of in our gospel, that knows that all one has of worth is the gift of God, so that Christ was able to accomplished great things through her even into our own time.

We had our abbatial election early this morning. Fr Elias was clearly elected for
his third term of 6 years. All went well and we will have the installation this afternoon
and a gaudeamus celebration this evening after Vespers. But please keep Fr Elias in
prayer, never an easy job this day and age, especially with all that is going on,
Fr. Michael
PS: Thank you for your prayer for the election.
https://www.ocso.org/2020/07/11/gethsemani-6/

Dear Brothers (no sisters today, at least not with us),
hope can be difficult to define. For most of us, hope is
synonymous with expectation. I hope it’ll rain today, you
might hope it doesn’t. We’re hoping it’s a girl this time. I
hope we have grilled cheese sandwiches next Friday. This
can even be extended to the spiritual realm. Janis Joplin
once sang a song which went, “Oh Lord, won’t you buy me –
a Mercedes Benz.” So hope can simply mean expectation,
something we want to happen and will be disappointed if it
doesn’t.
But the meaning can be more subtle than that. Hope is
also an attitude. It is a confidence that despite how things
look right now, everything will turn out all right in the end. In
this case, hope doesn’t depend on particular outcomes.
Generally, this form of hope even mistrusts what we might
envision as an outcome, preferring instead to leave things to
God. I remember talking to the nurse practitioner at the
doctor’s office some years ago about our Br. Raphael. She
was the one who told him that his cancer was inoperable.
She started to cry, but Br. Raphael said, “Don’t cry. It will be
all right. Whether I live or die it will be all right.” You might
think that dying is about as far away from all right as it gets,
but Br. Raphael didn’t think so. He had a larger view of
things. He had an attitude of hope.
In this form, along with faith and love, hope is also one
of the so-called theological virtues. In the language of
theology, these virtues are unattainable in their perfection by
us as creatures. Instead they are given to us, or infused into
us, by God, for the purpose of inspiring specific virtuous
actions. However, this doesn’t mean that God is stingy with
these virtues – as we all know from experience, we do feel
hope, faith and love on a regular basis. We might take
comfort in the fact that when we do feel these common
emotions, we are in direct contact with God who must supply
them. When we feel hope, it is an echo of God.
All this said, for most of us, hope is a fragile thing.
Unless we are as spiritually advanced as Br. Raphael, it can
be broken or turned to despair by any setback or failure. We
trust in God when things are going well, but we turn back to
ourselves and our own resources when they go badly, and,
partially as a result, things tend to go from bad to worse,
confirming our suspicion that God is somewhere else taking
care of somebody else. 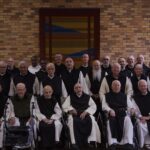 Dear brothers and sisters of LCG,

Each month we have been gathering via Zoom and in time sync with the monks of Gethsemani for the Sunday evening Compline service.  This month’s gathering will be held this Sunday, May 21, at 6:30 pm CDT.   (7:30 EDT)  The contact numbers are shown below.  I hope you will be able to join us and share in this time of community prayer.