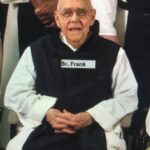 Whether we live or die, we are the Lord’s.

As far as Br. Frank is concerned, this homily is just a formality. Visiting with him over the years during his various health crises and especially during the last months of his life, I never had to wonder what I would say to him. He gave his own little homilies to both of us, and they were more substantial than what I would have said. He was his own best motivator. The reading we heard from Saint Paul encapsulates well Frank’s basic attitude: “. . . if we live, we live for the Lord, and if we die, we die for the Lord; so then, whether we live or die, we are the Lord’s.”

Brother Frank was always two steps ahead, always anxious to know what was coming next. Looking through his file, I noticed an unusual letter from him addressed to the Dom James in 1959, the year of his entry. He had applied to enter in June of that year. Most of the entrance paperwork, like the doctor’s report, is from that July. But Ed Gore, as he called himself at the time, was getting impatient. So, on August 2 he wrote a letter to Dom James: “Dear Rev. Father: This is just a brief note in order to find out as to whether or not I have been accepted. . . .” He goes on to ask five questions about what to expect, to whom he could write letters, who could visit, etc. As he readily admitted, he inherited a strong worry gene.

Another constant in his life was a sense of duty. He wanted to know what was expected of him, and he wanted to carry it out well. He had a vocation at a young age but felt duty-bound to put his plans aside for several years to respond to the needs of his family. By all accounts, his choice of the Trappists was a good fit. The brothers’ way of life with its clear expectations suited him well.

But these natural supports only took him so far. What really shaped him were unexpected developments, things he never would have dreamed to ask about in his anxious letter to Dom James. After all, the disciples’ way can be no different than the Lord’s way, who came “not to do  My own will, but the will of him who sent Me,” as we just heard from John’s gospel. Br. Frank ended up spending a long period of his life at the abbey’s foundation in Chile: 1966-1986 at La Dehesa, and then at the new site, Miraflores, through 1989, when he returned to Gethsemani. No doubt he enjoyed the hard work of founding a new house. But life in that new community was quite different from what he had experienced in the hundred-year-old monastery he had entered. Notice also the time-frame: his first years in Chile were in the immediate wake of the Second Vatican Council. Like everyone in those days, Br. Frank had to learn to rely more and more on his own resources and less and less on the institutional supports he took for granted in his formative years. Wading through personal difficulties during that period was an unexpected extension of his formation. No doubt some of the homilies he repeated to himself and to me date from that time, being half in English, half in Spanish. He learned the hard way that self-reliance has its limits and that the only way forward was through God’s mercy. “Everything that the Father gives to Me will come to Me, and I will not reject anyone who comes to Me,” as we heard from the gospel of John.

The path of spiritual maturity took him further still when he was faced over and over again with surgeries meant to get him back on his feet. Each time he had to let go of his self-reliance a little more. He had to learn to recognize God’s mercy in the hands of those who helped him. Few people develop the kind of patience Br. Frank showed in recovery after recovery.

As one of the brothers mentioned in chapter, Br. Frank was one of those people you hardly notice. He probably wanted it that way. Meanwhile he was quietly following a long itinerary of spiritual growth. He got what he came to the monastery for, but only by accepting a path different from what he had planned on. Today we witness his return to the One whose mercy he discovered: “and this is the will of Him who sent Me, that I should lose nothing of all that He has given Me, but raise it up at the last day.”

And what about that pesky worry gene? Maybe worry is a sign on the surface of a much deeper thing described so well in the book of Job [19:27]: “. . . my inmost being is consumed with longing.”