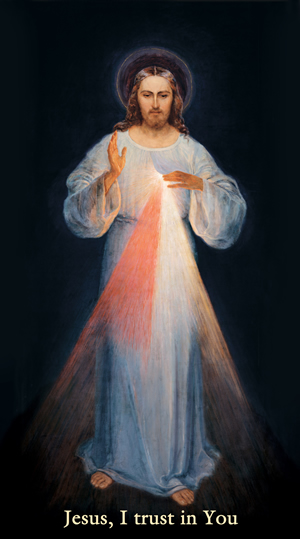 On the evening of that first day of the week,

when the doors were locked, where the disciples were,

for fear of the Jews,

Jesus came and stood in their midst

and said to them, “Peace be with you.”

When he had said this, he showed them his hands and his side.

The disciples rejoiced when they saw the Lord.

Jesus said to them again, “Peace be with you.

As the Father has sent me, so I send you.”

And when he had said this, he breathed on them and said to them,

Whose sins you forgive are forgiven them,

and whose sins you retain are retained.”

Thomas, called Didymus, one of the Twelve,

was not with them when Jesus came.

So the other disciples said to him, “We have seen the Lord.”

But he said to them,

“Unless I see the mark of the nails in his hands

and put my finger into the nailmarks

and put my hand into his side, I will not believe.”

Now a week later his disciples were again inside

and Thomas was with them.

Jesus came, although the doors were locked,

and stood in their midst and said, “Peace be with you.”

Then he said to Thomas, “Put your finger here and see my hands,

and bring your hand and put it into my side,

and do not be unbelieving, but believe.”

Thomas answered and said to him, “My Lord and my God!”

Jesus said to him, “Have you come to believe because you have seen me?

Blessed are those who have not seen and have believed.”

that are not written in this book.

But these are written that you may come to believe

that Jesus is the Christ, the Son of God,

and that through this belief you may have life in his name.

On two evenings, Jesus came into that locked room.  The first time, Thomas was not there.

Where was Thomas?   Was he out making other plans, ready to go back to his former life?

That’s what the chief priests were counting on: “Strike the Shepherd, and the flock will be scattered.”      Maybe  starting with Thomas.

It was so easy to doubt!   Because  IF Jesus truly were    the Beloved of God,

then God would never  have allowed Him to be overcome by His enemies.

But, He died such a shameful death,     reserved for the worst of criminals,

which, in one stroke, wiped out all the good He had ever done.

As much as they loved Him,  He was a failed Messiah.

His shameful death robbed all His teachings and even His miracles of any lasting significance.

He was dead, that was the end of it –

They looked for… expected …nothing more.

Suddenly, there He was…  the Risen Christ standing in their midst saying in that familiar voice: ‘Peace be with you!’

They were paralyzed …  shocked … afraid to believe their own eyes.

Jesus began to speak and  move,

and very slowly reality  sank into their consciousness.

He showed them the wounds on His hands and His feet, invited them to touch Him.

He broke bread with them and ate a piece of broiled fish before their eyes.

His rising from the grave was every bit as real as His dying on the Cross.

His resurrection turned their human way of thinking upside down –

it was proof that the power of God had  honored Jesus more than enough to obliterate His shame.

They had to admit the impossible:

The Crucified One who had truly died … had truly Risen!

He was standing in front of them … alive !…   proof that He was the very Son of God…   the promised Messiah of Israel, the Savior of the world….

However,   God is a God of second chances.

A week later, Thomas was back, as God’s Mercy  broke through again.

Jesus did it a second time, did the whole thing over again, perhaps  just for Thomas.

Even though the doors of that upper room were locked, Jesus stood in their midst, and said, “Peace be with you…”   Then He held out his hand so Thomas could touch the nailmark, and pulled aside his robe so Thomas could put his hand into the wound on his side! There had to be  tears in Thomas’ eyes as he realized   he was being shown more than a hand and a side, he was being shown love, ….those beautiful words were meant for him…  “Peace be with you… It is I, do not be afraid.”    He was being shown the Mercy of God…   He was being given a gift he didn’t deserve, couldn’t possibly  earn, a gift  freely given to him anyway out of Love.     That’s one definition of mercy.

Notice … just as there’s no horse in Scripture for St Paul to fall from (the horse just shows up in paintings and preaching), so too  the gospel never says Thomas puts his finger into Jesus’ wounds, it’s something artists need to make their painting work.

Just the presence of Jesus standing in front of him so overwhelmed Thomas that he gave up the idea of poking his finger into Jesus’ flesh.

Proof, prove, proven …   Whatever Thomas wanted, he got!  An Encounter that gave him the faith to say:   “My Lord and my God,!”  Enough faith to go out and preach that message as far away as India,  until his martyrdom  about the year 72.

Which is what brings us here today: Our belief that Jesus Christ truly rose from the grave.

His Resurrection has always been the foundation of the Church,

if you take away that one cornerstone, everything else tumbles down.

You can’t be Christian and not believe in the Resurrection, it’s that basic.

It’s not easy, even the Apostles didn’t expect the Resurrection,  it came as a shock.

It was a stumbling block for converts.  Remember St Paul, standing in the middle of the Areopagus in Athens, preaching to a crowd about Jesus…  a crowd listening very attentively until Paul  spoke of the Resurrection…then they began to snicker and mock and walk away.

Or St Augustine: “It’s no great thing to believe that Jesus died…

pagans, Jews, all the ungodly believe that He died…  The truly great thing is to believe He Resurrected….    that’s the faith of Christians.”

We like the story of Thomas, and the other Apostles, how they were so specially tutored by Jesus for three years, yet how earthy they remained,  how they  managed to flunk so many exams,

and how, in His mercy, Jesus always gave them another chance, until they finally got it right.    We like it because that’s our story, too.

means the same thing … it’s about a God who comes out to meet us where we are.

In His mercy, He comes to us in our weakness, in our failings, in our doubts even.

He comes to move us from where we are to where He wants us to be.

God is not finished with us.  He  still has work for us to do.